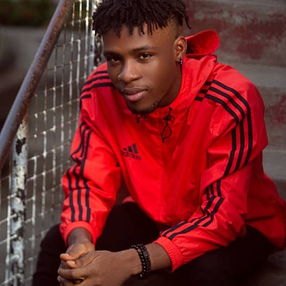 Joseph Akinfenwa Donus popularly known as Joeboy was Born on 21 May 1997 in Lagos, Nigeria. The Nigerian singer holds a Bachelor's Degree in Human Resource Management from the University of Lagos (UNLAG). Joeboy got signed into Mr Eazi empawa record in 2017.

His debut single "Baby" released in 2019 fetched him so much recognition. This song gained several millions of views and streams from many digital platforms including Youtube and Spotify. His second single "The Beginning" is another record that sealed his place in the heart of Nigeria music lovers.

Joeboy's debut EP "Love & Light" released in 2019 houses hit songs including; Baby, The Beginning , All of You and Don't Call Me featuring DMW heir apparent Mayorkun.

The Album "Somewhere Between Beauty & Magic" while be Joeboy's debut studio album and it's schedule to be released in 2021.

The "Baby" crooner has amass a lot of wealth for himself, his net worth is estimated to be about $800,000. His occupation is singing, song writing and showbiz.

The Empawa front liner, Joeboy has received so many nominations and Awards. He bagged the All Africa Music Awards for Best Artiste in African Pop in 2019, The Soundcity MVP Awards Festival for Best Pop Album in 2020 and several other nominations.

Download All Joeboy Latest Songs, Albums and Videos Below

Somewhere Between Beauty and Magic Album Released in 2021

Love And Light EP Released in 2019