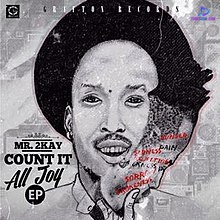 
Another impressive song is "Number 1" which was recorded by the Afropop singer, Mr 2kay.


Mr 2kay offers the fans a new record tagged "Number 1", which would be generally accepted. He released this song in the year, 2016 which has started making a trend and collecting lots of streams on the platforms." Number 1" was one of the tracks from his new Extended Play named "Count It All Joy".

Mr 2kay is proud to present his very first Extended Play "Count It All Joy" which has been shared for digital downloads. It was released under the imprint of Grafton Records.

Count It All Joy is a beautiful and anticipated project from Mr 2kay which consists of nine impressive tracks. It features guest appearances from The Jonsers, Timaya, Cynthia Morgan and Seyi Shay, who rendered good services in making a done and dusted work.

Lastly, the song "Number 1" makes way for itself to be the 2nd and one of the most interesting tracks you shouldn't miss from Mr 2kay... Listen and download it below!!!