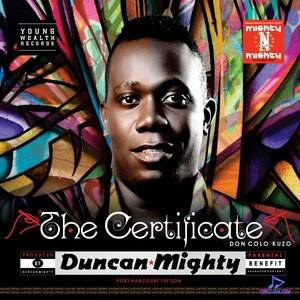 
Duncan Mighty blessed his fans with a new beautiful song titled "Janimaaah", as he offers a new album.


Thinking of what to offer again, the Nigerian recording artist, Duncan Mighty presented a new song named "Janimaaah", which would be accepted by the fans out there. He dishes out this song in the year, 2016 which has started going viral and becoming the new music to enjoy this time. The song "Janimaaah" was off his new and anticipated album titled "The Certificate".

The Certificate is another great and remarkable by this Nigerian superstar, Duncan Mighty. It comprises nineteen impressive and well-created songs which guest appearances from Timaya and Double Jay, whose individual services are generally accepted. Truly, the album is worth more listening to and here we enjoy it.

Taken from the album, the song "Janimaaah" appeared as the 19th and one of the best tracks with special production that will surely be worth a nice place in your playlist and here you have it for your free download.