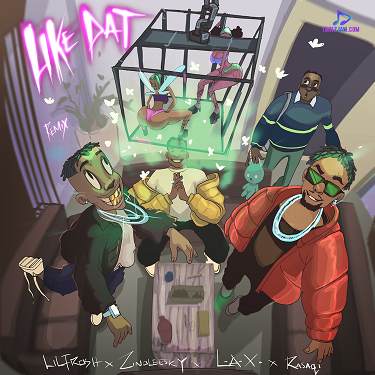 
To add more pressure to it, the Afrobeat singer, Lil Frosh released the remix of "Like Dat" as he calls out Zinoleesky, LAX and Rasaqi NFG, who added their voices to create something beautiful. The song was released in 2022 which has started going viral and becoming the new sound to enjoy this time.

Sani Goriola Wasiu known popularly as Lil Frosh is a Nigerian singer and songwriter. He is one of the most talented and young celebrated musician who has worked with lots of superstars in the industry.

"Like Dat" was the previous song from his previous body of work Extended Play called "Beyond Infinity". The song only features the likes of the Marlian recording artist, Zinoleeky which was a massive play after its release. The official video of the song was released in March and has accumulated lots of views on the Youtube channel.

Today, the young crooner calls out other artists like LAX and Rasaqi NFG, who rendered good services in making it another new and special offering that would be accepted by the fans out there. Truly, the song is on point and trust me, you won't like to miss it.

Lil Frosh - Life Of The Party

Lil Frosh - So Many Things