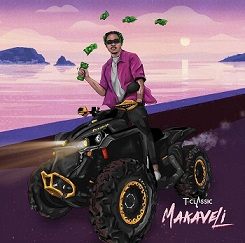 Tolulope Ajayi better known by his stage name as T Classic dropped his new single titled Makaveli which has started gaining massive airplay across the country and also going viral online enjoying over 5 million views just a few hours after it was released.

The young upcoming talented Nigerian singer and songwriter, T Classic who gained prominence with his hit single tagged Nobody Fine Pass You in 2019. He woned the City People Music Awards for Most Popular Song of the Year the same year and was also nominated in the City People Music Awards for Most Promising Act of the Year with the same song Nobody Fine Pass You.

Now he has appeared to do the same with this new amazing track captioned Makaveli which has been among the new song on everyone's lips. The young star, T Classic who made the list of the Nigerian rave of the moment comes through with this single tagged Makaveli which was produced by Kentee Beatz to excite his fans.