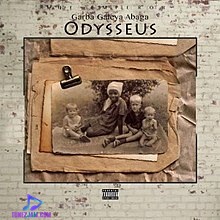 
Take this new song "Wide And Blue" which was composed and recorded by the Nigerian rapper, Jesse Jagz as he offers a new album.


Thinking of what to offer again, Jesse Jagz brings out another piece of music titled "Wide And Blue", which has started making a huge trend out there. He kicks off the record in, 2017 and was taken from his new and anticipated body of work album titled "Odysseus".

Today, after the successful release of "Jagz Nation Vol. 2: Royal Niger Company", Jesse Jagz releases his fourth studio called "Odysseus" which has been shared on all digital downloads. It was released under the imprint of Jagz Nation which is owned by him.

Odysseus is a phenomenal body of work where Jesse Jagz goes beyond expectation. It is made of Hip-hop and Dancehall which comprises ten impressive tracks. It feature guest appearances from Hotyce, Styl-Plus, Cynthia Morgan, Melon and Burna Boy, who rendered good services in making it a done and dusted work.

Lastly, the song "Wide And Blue" makes way for itself to be the 5th and one of the best tracks you've been wanting to overhear and here you have it for your free download.

Share Jesse Jagz - Wide And Blue Mp3 with others on;