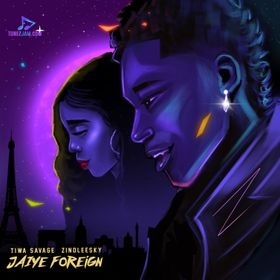 
"Jaiye Foreign" is a new song by the Nigerian singer and songwriter, Tiwa Savage featuring Zinoleesky.


Such a blissful day like this, Tiwa Savage a.k.a, (African Bad Gyal), features the singer, Zinoleesky as they create the song "Jaiye Foreign". It was released in 2022 and fans are delighted about the new song and its impressive performance.

Tiwa Savage is a Nigerian singer and songwriter. One of the most celebrated female singers in Nigeria and Africa. Savage has been active in the industry since 1996 and has worked herself out by being nominated and winning many remarkable awards. Due to her impressive performance, she is being called by few as African Bad Gyal.

Today, as she continues the beautiful, Savage just released a new and classic melody "Jaiye Foreign" as she features the Marlian recording and sensational superstar, Zinoleesky. Both crooners did perfectly well as they showcases their different capabilities. Truly, the song is for you...

Production was handled by a Nigerian favourite sound producer, Pheelz.