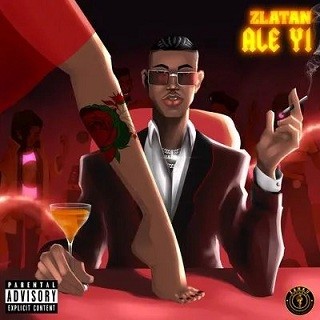 
Zlatan Ibile returns back with another interesting record called "Ale Yi", for the listening delights of his music fans.

One of the Nigerian street ambassadors, Zlatan, surfaced back into the music scene, as he kicks off the month of October 2021, with this astonishing record he tags "Ale Yi". Zlatan, released this studio number after he created magic with Nigerian hottest singer, Buju, on the record called "Alubarika", which is buzzing around. The record also comes up with a colourful befitting music video filmed and directed by iconic videographer, TG Omori, doing his thing as usual.
Still savouring the record, Zlatan, comes through with this single record "Ale Yi", a groovy soundtrack, with insightful lyrics and lively verses. The record was produced on the desk of Nigerian illest music producer, Niphkeys, with his magical fingers.

Zlatan Ibile is one of the most influential musical artists in Nigeria. He rose to prominence after his record "Zanku", in 2018, which also came up with a dance routine of the same title. This artist has contributed immensely to the growth of Hip Hop music in Nigeria. His versatility is something to reckon on.
In addition this year 2021, he's been nominated for three awards at Net Honours for "Most Searched Actress", "Most played street hop song" and "Most played Hip Hop song". Now, let's enjoy this single record from him tagged "Ale Yi".