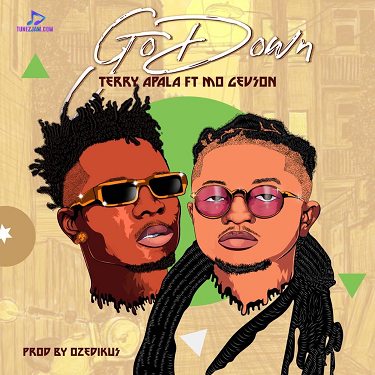 
"Go Down" is a new appealing and enjoyable song by the Nigerian singer, Terry Apala which had the additional voice of Mo Gevson. It was recorded and released in 2022 and has started going viral and becoming the new sound to enjoy this time. "Go Down" was released through Dvpper Music and production was handled by Ozedikus.

Terry Alexandar Ejeh better known by his stage name Terry Apala, is a Nigerian afrobeat and Apala (traditional Yoruba music) hip-pop musician. He is one of the top-celebrated Nigerian acts and has mingled with lots of superstars in the industry.

Today, after the successful release of "AARE (album)", the self-acclaimed King of Apala New Skool released another gorgeous record in which he performed well in reaching fans' expectations and satisfaction. It is a well-created song that will surely be worth a place in your music playlist.

Share Terry Apala - Go Down ft Mo Gevson Mp3 with others on;

Terry Apala - If Not For God