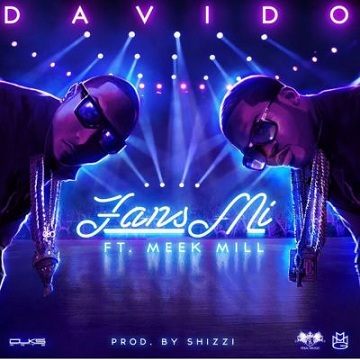 
Grab this Shizzi-produced record named "Fans Mi" recorded by highly talented Nigerian singer, Davido, in which he taps the availability of American prolific rapper, Meek Mill, who attended the session with positive mindest, drooping good flows and massive punchlines.
Fans Mi, is a classic tune, with infectious lyrics and vocals. The lyrics were well thought out making the record more relatable, very easy to the ears. Released in the year 2015.

The record "Fans Mi" is Davido first international collaboration since his inception in the game. He really performed extremely well on this record, as he proves his versatility coupled with authentic delivery.

Meek Mill, whose real name is Robert Rihmeek Williams, is an American rapper and performer, born in Philadelphia, one of the most influential rappers in America. This artist has released copious records and has graced the stage with high profiled musical artists; T.I, Drake, Rick Ross, just to mention a few.

In the year 2015, the Nigerian lyrical genius, Davido joins forces with Meek Mill, on this enthralling record named "Fans Mi". The record is a must-listen.