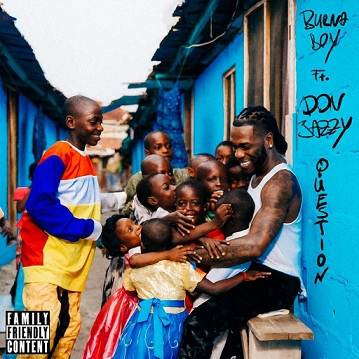 
Celebrated Nigerian music artist, Burna Boy, is out another with his second single of the year 2021 tagged "Question" in collaboration with Don Jazzy.


The Grammy Award Winner, Burna Boy, delivers a new record named "Question", as he hires studio appearance from Mavin Records CEO, Don Jazzy, released in the year 2021. Burna Boy, came through with this record, after his song "Kilometer", a stunning tune, still blasting speakers, and having good standing streaming on digital stores.
The record "Kilometre", is Burna Boy, first record this year 2021, it topped No.1 on Apple music charts, under 24 hrs of its release, surpassing Blaqbonez record "Bling" which stayed at the top of the chart. This is to show you that "Kilometre" is a hit, even without listening to it.

Now, Burna Boy, comes again with another sizzling record he tags "Question", in collaboration with Don Jazzy, as the two artist, gave their best to make "Question" a successful one. Burna Boy has contributed immensely to the growth of Hip Hop music in Nigeria. The singer is so talented and hard working and his songs speaks the volume of hard works, which his fans can testify. Before the released of this single record, Burna Boy, created magic with Port Harcourt first son Duncan Mighty, on the record called "Nibolowa", which is still climbing major music charts.

Finally, here comes this impressive soundtrack named "Question", by Burna Boy and Don Jazzy. which the entire lot of people in Africans and young proletariats can relate with and sing-along.