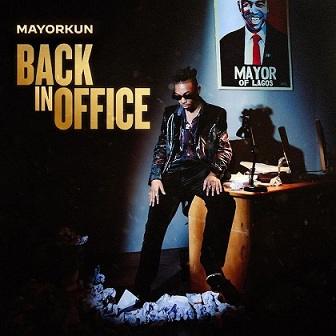 Track Title: Back In Office

Album Name: Back In Office Album


The Nigerian rave of the moment, Mayorkun has hit again with a new song called "Back In Office" off his new project album.


Have you been wanting a new song from the Mayor of Lagos?... Here we have a new song from him titled "Back In Office" which has started making a huge trend in Nigerian and across the country. He dropped this song not long ago off his new anticipated body of work and sophomore album titled "Back In Office" which was made worldwide not long ago. The album was released via Sony Music Entertainment.

From the album, the song "Back In Office" stands as the 2nd track and one of the best that will leave a smile on your face and take your enjoyment very far. The song is a phenomenal record with a special production from the Nigerian ace producer Speroach Beatz,

The song "Back In Office" is ready to serve you this weekend. According to the official video which has been premiered via the Youtube channel, the video explains where Mayor imagines himself as a real-life CEO returning to the office and being met with delighted crowds. Truly, Mayor showed another side of him you've never seen and trust me you won't like to miss it.