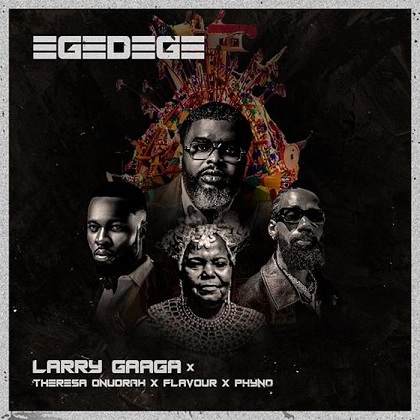 
Here comes this sizzling record named, Egedege, which features Phyno, Flavour and Theresa Onuorah. The record was unlocked by Nigerian label executive, singer and songsmith, Larry Gaaga. This masterpiece record was released this year 2021, for the strictly listening pleasure of his music audience.

Larry Gaaga, teaming up with these Nigerian heavyweight musicians, Phyno, Flavour and Theresa Onuorah, is mind-blowing. They all displayed their vocal prodigy on this number. Egedege, is an enchanting soundtrack, with unforgettable hooks and a slow bop that pleases the ears. Its production was handled by ever blazing Nigeran music producer, Masterkarft, doing what he's best known for.

Larry Gaaga, whose real name is Larry Ndianefo, came through with this thrilling euphony, after his excellent studio body of work called, Nneka (The Pretty Serpent), which was unlocked in the year 2020. This artist has collaborated with some A-list artists like 2baba, Davido, Peruzzi, Wizkid, Patoranking and many others. Enjoy this tune, Egedege. You will surely love it.