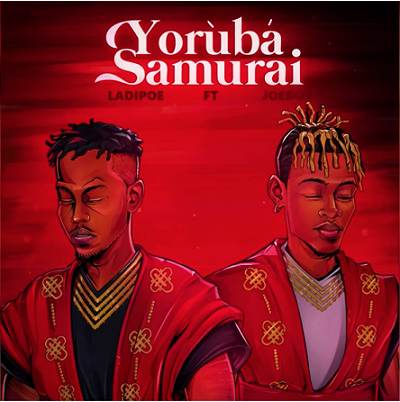 
Mavin Records act, Ladipoe drops this song ''Yoruba Samurai'' as he features Nigerian rave of the moment, Joeboy on this song.


Trending Nigerian artiste, Ladipoe comes forth with this impressive jam dubbed ''Yoruba Samurai'' with the assistance of emPawa Signee, Joeboy on this one, as Joeboy held to the chorus as they deliver a summer smash. Produced and mastered by Mavin records in-house producer, Ozedikus. Released in the year 2020.

Since been signed to Mavin Records, Ladipoe has been making good and nice vibes since then. He dropped ''Know You'' featuring Nigerian silky voice vocalist, Simi on this one, Later on, he dropped ''Lemme Know Remix'' on which he featured Nigerian songstress, Teni Makanaki (Sugar Mummy of Lagos), which is still buzzing out till now.
However, still enjoying these two hit songs ''Know You'' and ''Lemme Know'' Ladipoe brings another one as he entitled this one '' ''Yoruba Samurai'' featuring Mr Eazi protege, Joeboy on this soundtrack, which perfectly blends in Rap and RnB sounds.
Produced by Ozedikus.


Share Ladipoe - Yoruba Samurai ft Joeboy Mp3 with others on;

EL ft. Ladipoe - Talk To Me