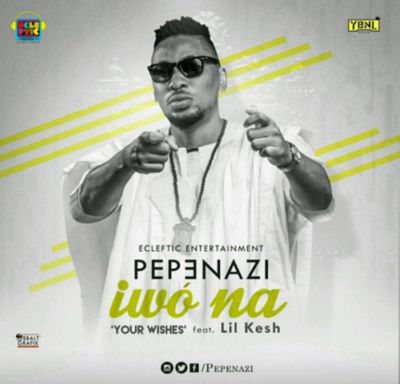 
Nigerian Hip Hop sensational musician, Pepenazi released this stunning tune named, Iwo Na, with vocal assistance from YBNL hitmaker, Lil Kesh, who gave top-notch rendition to the record.
Iwo Na is a captivating soundtrack, Pepenazi released this song to all his music audience, as a birthday tune, wishing them all they wished him and more, in the year 2016, which was well-accepted by his fans.

Pepenazi teaming up with Lil Kesh is an excellent one. Both artists, performed acutely well on this record, solely produced by Htee, mixed and mastered by Indomix.

Pepenazi has won the hearts of many music listeners. He gained enough recognition with his record, Illegal, in 2015, which features Nigerian street ambassador, Olamide. Now, enjoy and experience the world of Pepenazi and Lil Kesh with, Iwo Na.