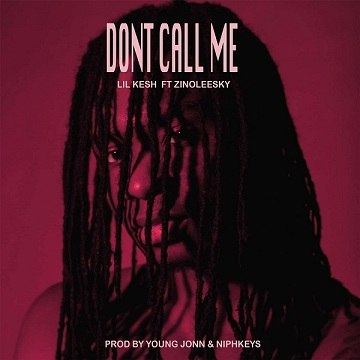 
Street raving superstar. Lil Kesh bounces back with a new record titled "Don't Call Me" having Zinoleesky as the guest artist who rendered good service in making the song a successful one. He released this song a few hours now which has been going viral and collecting lots of streams on the digital streaming platforms.

Lil Kesh who was the fans favourite artist after the release of "Efejoku" is now back again with this dazzling record to turn up the industry. Fans are widely excited about his appearance and consistency in the game. He is one of the Nigerian young and talented artists who turn up the industry soon as he got signed to YBNL owned by the Nigerian superstar, Olamide. As the year is coming to an end, he makes a new offering with the song "Don't Call Me" requiring vocal Zinoleesky who did awesomely by giving the song a nice vocal and lyrics that will be acceptable to the fans. Both singers did perfectly and the song is another one you've been wanting to enjoy this summer. The production credit goes to Young John and Niphkeys.
|
Listen up and download the song below!


Share Lil Kesh - Don't Call Me ft Zinoleesky Mp3 with others on;

Krizbeatz ft. Lil Kesh - Give Them