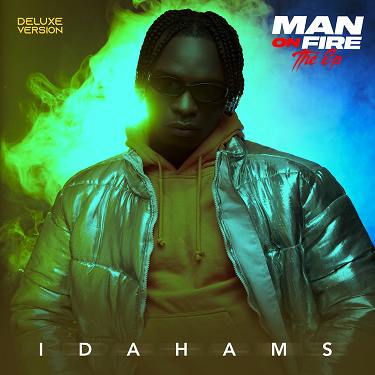 
Seize the song "Man On Fire (Remix)" by the Nigerian singer, Idahams featuring the rapper, Falz.


This time, Idahams comes with the remix of his trending song "Man On Fire" requesting vocal from the Nigerian rapper, Falz. He released this song in the year, 2021 off the deluxe edition of his new trending project "Man On Fire" which houses three tracks. It was released through Grafton Entertainment / Universal Music Nigeria.

In this song, Idahams and Falz talk about the criticizing of people over one's life. With their experiences in life with the people out there they decided to compose and record the song to the hearing of everyone out there.

The year, 2020, was a successful one with Idahams making an offering with "Man On Fire" EP in mid-year, which was a follow up to his 2019 project "Amayanabo.

With lots of fans, positive remarks and critics on Man On Fire, the Afrobeat and Afropop crooner decided to offer the deluxe edition, embedding more energy into it.

In "Man On Fire" he called in no one, but with the deluxe edition, he requested vocal assistance from the Nigerian rap star and Bahd Guys Records boss, Falz who aid in making it a successful one. Fans reactions to the project this time show that the crooner did awesomely and can't wait in having another project from him.

Here, the song "Man On Fire (Remix)" appeared as the 1st track you shouldn't miss from Idahams. The song is a must listen to and here you have it for your free download.


Share Idahams - Man On Fire (Remix) ft Falz Mp3 with others on;