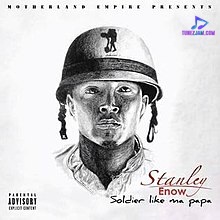 
Still can't let the buzz fade away, the Cameroonian superstar, Stanley Enow brings out another captivating tune titled "King Kong" as he calls out Dj Neptune, the Nigerian producer, as the guest artist. He released this song in the year, 2015 off his new trending album titled "Soldier Like Ma Papa".

At a time like this, Stanley Enow comes to the conclusion of releasing his anticipated body of work album "Soldier Like Ma Papa". which has been shared on all streaming platforms. It was distributed by Sony Music Entertainment via Rockstar4000. According to the album title, it pays tribute to Enow's father, who is a veteran of the Cameroon Army.

Soldier Like Ma Papa is a phenomenal album mainly made of Hip-hop but was also mixed with ragga, reggae, R&B. It comprises 17 impressive and solid tracks which features guest appearances from Bill Muicha, Claude Ndam, Locko, 2Baba, Ice Prince, DJ Neptune, Biz Ice, Sarkodie and F.A.B, whose services are generally accepted. Truly, the album is worth listening to and here we enjoy it.

Off this stunning album, the song "King Kong" pops up as the 4th and one of the best tracks that will keep you dancing each time you started listening to it.